5 Signs of a Failing Sales Manager

Every sales leader will fail at some point in their career. It’s a reality that isn’t often discussed.

Despite the inevitability, it’s possible to identify the early signs of failure and hopefully, quickly intervene.

In Ray Dalio’s book Principles, Ray urges us to keep in mind that managers fail or fall short of their goal for one (or more) of five potential reasons. 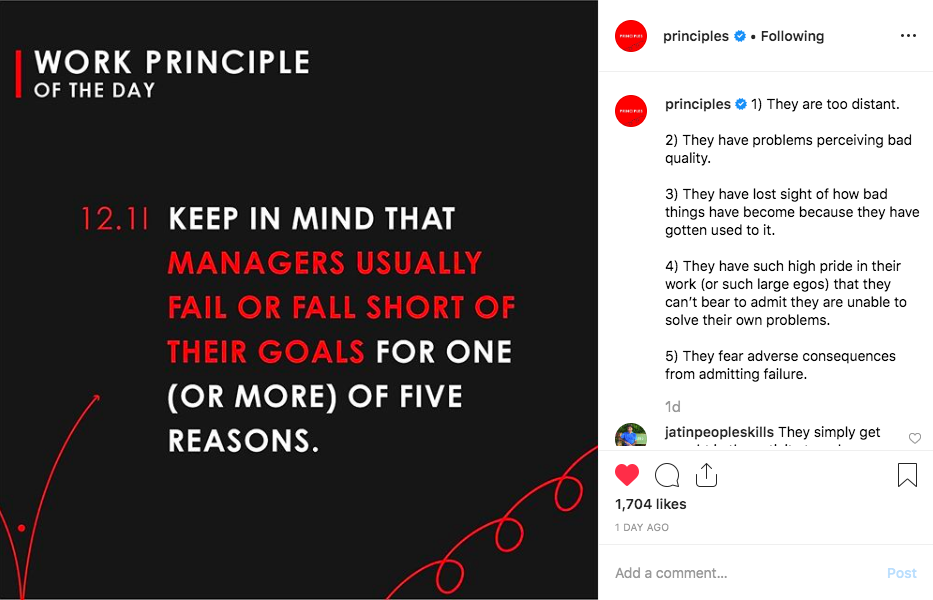 Let me explain how these reasons manifest in sales leaders so that you can step in and prevent failure.

They are too distant

Sales leaders that become too distant have lost touch with reality. They can no longer relate to the team. Sales reps roll their eyes when the leader talks (if they even interact with the leader). The team doesn’t want the leader in important meetings.

They don’t understand the realities of the market. Pricing, positioning, and competition landscape are topics they avoid. Instead they want to talk about “how it used to be,” or worse how they sold when they were a rep.

They’ve lost touch of the customer’s reality. They don’t go on meetings and don’t have relationships with customers.

If the leader doesn’t leave the office or their home to interact with the team and customers, then it’s inevitable they will become too distant. Good sales leaders understand the balance between managing the team, the business and the customers.

They have a problem perceiving bad quality

Approving deals that are good for the sales numbers but bad for the business, allowing good sales performance to absolve bad behavior, and attempting to mask poor conversion with more leads are all signs of a failing leader. How we deliver results is just as important as actually delivering results. Attention to quality is a sign of a leader who considers sustainability. Sales leaders who have a problem perceiving poor quality can’t sustain success. They have good months, but can’t be relied on to consistently produce results. Eventually the gimmicks, the short-sighted tactics and tolerance of bad behavior catches up with them.

We get two things as sales leaders: 1) what we create and 2) what we tolerate. Failing sales leaders only pay attention that which can be “created.” This looks like spending more time with top performers (or products) hoping the efforts will make up for poor performance in other reps (products). Good leaders pay attention to both. Simultaneously coaching top performers while refusing to tolerate bad performance or poor behavior.

Unable to solve their own problems

Many sales leaders think they must create the solution to every problem. This not only a problem within itself, but a leading sign of a failing leader. Yes, its the leaders job to solve problems, but they don’t have to be the source of every solution. Seeking help, delegating decision making and asking for help are all healthy behaviors. Good sales leaders are resourceful. They solicit help from other sales leaders, company executives, sales reps, and external resources like consultants and literature.

Sometimes the solution to a problem is in a book, podcast, or a phone call away. When the leader doesn’t quickly deploy solutions to a problem, it’s a sign of failure. They choose letting the problem linger vs. enlisting help from others.

Every sales leader makes mistakes. In fact, if the sales leader isn’t making mistakes, then she isn’t taking enough chances.

Don’t judge me by my mistakes, but rather judge me by how I respond to them. It takes humility to admit mistakes, and confidence to own mistakes and proceed with a correction plan. A failed promotion. A hiring mistake. Own it. Move on. Failing sales leaders compound their mistakes by refusing to admit past mistakes and defending bad decisions.